Vineargenti, the quality of a great Reserve

Bosco del Merlo, once again, stands out as an ambassador of quality in Lison Pramaggiore area: our Lison Pramaggiore Rosso Vineargenti Riserva 2014 has been awarded with the 5 Grapes Bibenda for the second year in a row, sign of a quality that remains, representative of the company style.

The highest recognition is also given by Vitae 2018, guide of the Italian Sommelier Association, which rewards Lison Pramaggiore Rosso Vineargenti Riserva 2013 with 4 Vines (Excellence certificate).

The awards to this wine do not came only from Italian guides, but also from international ones, in fact the prestigious French Guide, Gilbert & Gaillard awards Vineargenti with 90 points, describing it:

These results make us proud of the work that is constantly pursued in vineyard and in cellar, a research of quality without compromise and a production, which was voted to enhancing the typical characteristic of the vine and its quality.

Blend of Merlot and Refosco dal Peduncolo Rosso. High in reserve, it represents the maximum expression of the territory and of the Bosco del Merlo red wine.

An author’s label, signed by the international artist Fabrizio Plessi, who wanted to portray the vitality of an ancient vine that rises from a computer screen flowing with wine, representing the fertile and vital relationship between technology, man and nature. 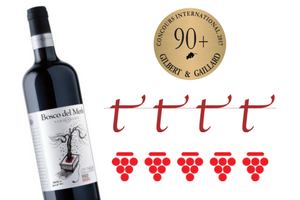 Great ratings for Cantina Castelvecchi wines by The Wine Advocate

Four stories about vines and wines based in
Veneto, Friuli, Lombardy and Tuscany. One sole commitment to achieve excellence by making accurate and exacting wine producing choices that enhance the natural aspects of specific terroirs and the character of a product skilfully matured in our wine cellars.